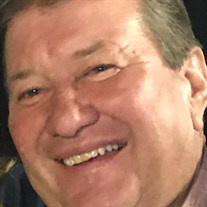 Bill Lockhart, 62, of Lampasas, Texas died on September 20, 2021, at Ascension Seton Medical Center in Austin, Texas. Bill was born on November 10, 1958, in Burnet, Texas to Gordon Keith (Bud) Lockhart and Neva Jo Taylor Lockhart and he resided in Lampasas, Texas. He was an entrepreneur contractor in the construction industry during his working life and was known for his expertise and thinking outside the box as most would describe. Bill loved his family, hunting, fishing, anything outdoors, as well as his Lord & Savior. He was a member of the First United Methodist Church of Lampasas and loved serving there, as he taught Sunday school and more. Those who knew him well called him “Lewis” and would answer to that in return. Bill never met a stranger, was so good with people and loved helping others. He was a friend to many! Bill is survived by two sons, Ryan Lockhart of Lampasas, and B.J. Lockhart of Saginaw, one daughter, Cegie Butts, and husband Brad of Lampasas, two brothers, Jim Lockhart, and John Lockhart, both of Lampasas, two sisters, Denise Cobel and Michelle Lockhart, both of Mansfield. He has four grandchildren, Lane, Paxton and Allyson Lockhart & Brennon Butts, along with numerous nieces and nephews. Bill is preceded in death by his parents, and two brothers, Lynn and Ted Lockhart. There will be a memorial service for Mr. Lockhart on Saturday, September 25, 2021, at 11:00 AM at the First United Methodist Church in Lampasas with Justin Reeves officiating. Mr. Lockhart will be cremated. Memorial donations may be made to the charity of your choice. Arrangements are entrusted to Heritage Funeral Home of Lampasas.

The family of Billy Joe Lockhart created this Life Tributes page to make it easy to share your memories.

Send flowers to the Lockhart family.