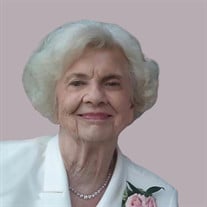 Billie Marie (Bebe) Latham Bagley passed away peacefully at home on October 27, 2021 at the age of 99. She lived a long, fruitful life. Born on January 29, 1922, she was preceded in death by her beloved grandmother Mary Elizabeth Young, her parents William H. and Leta Young Latham, her sister JoAnn Hollier Clegg, and her husband of 56 years Dean Bagley. Graduating from high school in Port Arthur, Texas in 1939, she attended Sophie Newcombe in New Orleans, La before transferring to Texas Christian University where she met her future husband. Both attended college in Fort Worth, Texas where Dean was a star football player. They found lifelong friends during those years and she developed a love for the game of football and remained a faithful supporter of TCU and football in general for the rest of her life. After the war they moved to San Saba where they spent their life together. Bebe was a homemaker and encourager of her two children through PTA, school events, and other organizations. She was a life long member of Pierian Study Club where she also formed many friendships. As a young mother she became a Christian and ultimately a Sunday School teacher for many years in the Church of Christ and remained a faithful member until her death. Bridge was also a passion for her. She was a competitive player and proficient at duplicate which she was enjoying until the age of 95. She also was an avid traveler and has been to many parts of the world making new friends and travel partners along the way. She loved and was very supportive of her grandchildren and lately of her 13 great grandchildren. She was generous to many. Bebe is survived by her son Dean Bagley Jr and wife Alita of South Padre Island, daughter Connie Adams and husband Buddy of San Saba, grandchildren Timothy Adams and wife Kim of Horseshoe Bay, Wesley Adams of San Saba, Ann Marie Adams Gould and husband Vince of Boerne, Brittan Bagley and wife Nicole of Liberty Hill, Adam Bagley and wife Brooke of San Saba, Javana Bagley Reyes and husband Arnold, Sara Bagley Delaney and husband Marcel, 13 Great Grandchildren, and her special niece Kris Hollier Radcliffe and husband Jim. In lieu of flowers memorials can be sent to Cherokee Home or Christian Homes of Abilene, P.O. Box 270, Abilene, Texas 79604. The funeral arrangements are entrusted to Heritage Funeral Home of San Saba, Texas. Please view Mrs. Bagley's online memorial at www.heritagefuneralhomes.com

Billie Marie (Bebe) Latham Bagley passed away peacefully at home on October 27, 2021 at the age of 99. She lived a long, fruitful life. Born on January 29, 1922, she was preceded in death by her beloved grandmother Mary Elizabeth Young, her... View Obituary & Service Information

The family of Billie Marie Bagley created this Life Tributes page to make it easy to share your memories.

Send flowers to the Bagley family.