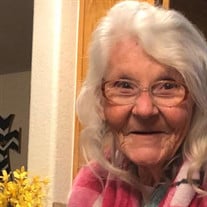 Betty Jean Compton, 75, of Copperas Cove, passed away at her residence on February 3, 2022. Betty was born on May 24, 1946, in Hope, Arkansas to Fred Tullis and Velma Anthony Tullis. She moved to Copperas Cove from Lometa in 2009. During her life, Betty had cared for people in many ways. She had been a nanny traveling with a military family, taking care of their children for several years. This position took her from Central Texas, to Maryland, and Washington. After those children were not in need of a nanny any longer, Betty became a health aide, taking care of people in their homes. She was a devoted, caring mother and grandmother and great-grandmother, she was known for her feisty and sassy personality. Betty is survived by three daughters, Donna Pettigrew of Copperas Cove, Sissy Jeter, and Claudia Buchanan, four sons, Robert Bearden of Atoka, Oklahoma, Brad Garner, Greg Sams, and Jerry Pettit. She is survived by one brother, William Tullis and one sister, Brenda Tullis. She leaves behind ten precious grandchildren, Dakota Bannister, McKenzie Pettigrew, Kendall Pettigrew, Michelle Bearden, Robert Bearden, Jr., Cat Lee, Brittany Lee, Zachary Lee, Jaycie Ray, and Hunter Ray, as well as three great-grandchildren, Emmalyn Bannister, Gracie Wiswall and Mason Wiswall. She is preceded in death by her parents. The Memorial Service for Mrs. Compton will be at 2:00 PM on Thursday, February 10, 2022, at Heritage Funeral Home in Lampasas. There will be a visitation prior to the service beginning at 1:30 PM. Chaplain Karl Bunjes will officiate the service. Memorial donations in Betty’s memory are invited to be made to the American Cancer Society. Arrangements are entrusted to Heritage Funeral Home of Lampasas. If you are unable to attend the service, please visit heritagefuneraltx.com and select Mrs. Compton’s tribute and a livestream will be available.

Betty Jean Compton, 75, of Copperas Cove, passed away at her residence on February 3, 2022. Betty was born on May 24, 1946, in Hope, Arkansas to Fred Tullis and Velma Anthony Tullis. She moved to Copperas Cove from Lometa in 2009. During... View Obituary & Service Information

The family of Betty Jean Compton created this Life Tributes page to make it easy to share your memories.

Betty Jean Compton, 75, of Copperas Cove, passed away at her...

Send flowers to the Compton family.