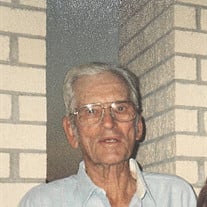 John 14:1-3 "Do not let your hearts be troubled. You believe in God; believe also in me. My Father's house has many rooms; if that were not so, would I have told you that I have a place for you? And if I go and prepare a place for you, I will come back and take you to be with me that you also may be where I am." Benton Wesley Miller, Sr., was called to his heavenly home Sunday evening, November 21, 2021. He was born to Lucille Augusta Behrens and John Wesley Miller in San Saba, Texas, on June 10, 1925. After high school, Benton was drafted into the US Army on October 17, 1944 during WWII. He served in the combat arms as a motorman, seeing action in the South Pacific and the Philippines. After the end of the war, he was sent to Korea to take the surrender of the Japanese. He earned the Combat Infantry Badge, Asiatic-Pacific Campaign Ribbon with 1 Bronze Star, Philippine Liberation Ribbon with 1 Bronze Star, Good Conduct Medal, Army of Occupation Medal (Japan) and the WWII Victory Ribbon. He was discharged on November 3, 1946 and later became an active member of the American Legion Post No. 27 in San Saba. For many years, Benton worked for the Fluer Corporation, traveling the world in Russia, Iran, South Korea, Scotland, and Alaska. His stories would leave you spellbound. He earned his pilot's license and loved to fly his airplanes that gave him the ability to continue his traveling wanderlust. Benton collected guns of all types and was an active shooter earning many trophies over the years. Brother Benton was an active Freemason. He was made an EA on August 5, 1976, FC on September 30, 1976 & MM on October 7, 1976 in New River Lodge No. 402 at Gonzales, Louisiana. He was affiliated with San Saba Lodge No. 612 in 1984, Richland Springs Lodge No. 882 in 1998 and Goldthwaite Lodge No. 694 in 2014. He served in every chair and was the Worshipful Master of No. 612 (1996) and No. 882 (2005). Benton served as District Deputy Grand Master for the Grand Lodge of Texas in 2002 and was awarded the Golden Trowel Award, that same year, by San Saba Lodge. He was also active in the Shrine and the Scottish Rite. In retirement, Benton was active. He worked his farm, tended to his cattle, and gathered pecans with his dogs Oscar and later Sweet Sugar. Benton was certainly no stranger to anyone and was blessed by many friends, spending time shooting the bull' with the boys at the Corner Cafe at the "Table of knowledge." He also loved the yearly parades with his last one this year, on July 4th, cruising in his classic 1938 Model 81A Ford. He is survived by his sister, Ann Talley, of Alpine; a son, Curtis Miller of Montegut, LA, and his partner Peggy; daughter, Belinda Miller Wells; and son-in-law, Woody Wells, of Georgetown, TX. He is also survived by several grandchildren and great-grandchildren. Benton was preceded in death by his wife Marilyn Miller, and son Benton W. Miller, Jr. Visitation will be held from 9:00 A.M. to 10:00 A.M. on Saturday, November 27, 2021 at Heritage Funeral Home in San Saba. Services will take place at Heritage Funeral Home Chapel at 10:00 A.M. on Saturday November 27, 2021, officiated by Sam Crosby, Minister - First Baptist Church. Afterwards, a Masonic Burial Service will be held graveside at the City Cemetery, San Saba, TX. At the request of the family, and in lieu of flowers, donations can be made to the San Saba Lodge Scholarship Fund - POB 602 - San Saba, Texas 76877.

John 14:1-3 "Do not let your hearts be troubled. You believe in God; believe also in me. My Father's house has many rooms; if that were not so, would I have told you that I have a place for you? And if I go and prepare a place for you, I... View Obituary & Service Information

The family of Mr Benton Miller created this Life Tributes page to make it easy to share your memories.

&quot;Do not let your hearts be troubled. You believe...

Send flowers to the Miller family.