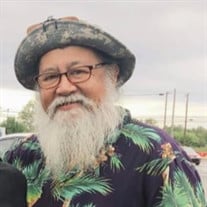 Benjamin Bancaco Flores, Jr., of Lampasas, Texas, died on August 31, 2021, at Advent Health Care in Killeen, Texas. He was born on July 15, 1956, in Honolulu, Hawaii, to Benjamin Bancaco Flores, Sr., and Leticia Flores. He had lived in Lampasas since 2000, moving here from Guam. He and Melody Cayabyab married in 2004 at the Lampasas courthouse. During his life, Benjamin had been an executive chef, working at various restaurants and hotels, a police detective while living in Guam, a Sensei, teacher of Aikido and he owned and operated a dog kennel, raising and selling American Bullies, and Chihuahuas. He loved the outdoors, fishing, and spending quality time with his beloved family. Mr. Flores is survived by his wife, Melody Flores of Lampasas, his mother, Leticia Flores of San Antonio, three sons, Melvin Flores of Leander, Haji Flores, and Jordon Flores, both of Lampasas and one daughter, Jasmine Flores of Lampasas. He has two brothers, and six sisters. He is survived by five grandchildren. Benjamin is preceded in death by his father. Arrangements are entrusted to Heritage Funeral Home of Lampasas.

The family of Benjamin Bancaco Flores Jr. created this Life Tributes page to make it easy to share your memories.

Send flowers to the Flores family.