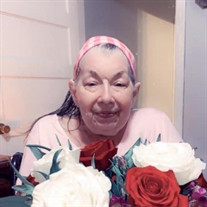 Barbara Ann Sherfield left her earthly home to be with her Lord on Thursday, May 27, at her granddaughter’s home in Mabank, Texas. She was born November 28, 1939 in Rochelle, Texas the daughter of James and Maggie (Sullivan) Baker. She late married Monty Sherfield who preceded her in death. She worked at Wal-Mart for over twenty-five years in Brownwood and later moved to Mabank to live with her granddaughter who was her caregiver for nine years. In her last days, she was cared for by Heather Brumis, Tiffany Stoddard, and Skyler Sherfield. She was a huge Christian lady who love to listen to John Hagee ministries, Joyce Myers, and the Statler Brothers. She always had a big smile and loving heart. She is survived by two sons, Roger Owens and Randy Sherfield, a daughter, Dennisa Johnston, two sisters, Earlene Marlar and Wilma Inman, six grandchildren, Heather Brumis, Tiffany Stoddard, Steven Sherfield, Ryan Owens, Kayla Mitchell, and Serina Burton. She also has fifteen great-grandchildren including Skyler Sherfield, Anastasia Serfield, Cody Sherfield, Maddison Squyres, Zachary Squyres, Andrew Burton, Lane Smith, Courtny Burton, Jeston Burton, Adrian Burton, Jenna Martinez, Statin Baker, Cadynce Owens, Cecelia Owens, and Robert Owens. She was preceded in death by her husband, Monty Sherfield, Her mother, Maggie Pauline Sullivan and her father, Earl James Baker. Family visitation will be held from 6 – 8 pm on Wednesday, June 2, at Davis-Morris Chapel with graveside services to be held at 11 am on Thursday at Jenkins Springs Cemetery with Benny Allcorn officiating. Services entrusted to Heritage Funeral Home, Davis-Morris Chapel, Brownwood.

Barbara Ann Sherfield left her earthly home to be with her Lord on Thursday, May 27, at her granddaughter&#8217;s home in Mabank, Texas. She was born November 28, 1939 in Rochelle, Texas the daughter of James and Maggie (Sullivan) Baker. She... View Obituary & Service Information

The family of Barbara Ann Sherfield created this Life Tributes page to make it easy to share your memories.

Barbara Ann Sherfield left her earthly home to be with her Lord...

Send flowers to the Sherfield family.