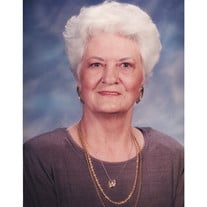 Barbara Rene (Henderson) Ray, 83, passed away on Monday, December 21, 2015 in Austin, Texas. Services will be held at 2:00 P.M. Saturday, December 26, 2015 at Heritage Funeral Home in Brady with burial to follow in Rest Haven Cemetery. Visitation will be held prior to the service from 12:00 P.M. - 2:00 P.M. Barbara was born on June 30, 1932 in Stamford, Texas to Otto and Floy (Campbell) Henderson. On August 3, 1947 she married the love of her life, Elmer White Ray, Jr. in Abilene, Texas. They had been happily married for 65 years at the time of his passing in December of 2012. Barbara was a woman of faith and a member of the First Baptist Church in Brady. She enjoyed sewing, reading and cooking, but she enjoyed being with her family more than anything. She was lovingly known by her grandchildren as "Grandmama" and as "Nana" by her great grandchildren. She will be greatly missed by all who knew and loved her. She is preceded in death by her parents; her husband, Elmer Ray, Jr.; one son, Richard (Rick) Ray: two sisters, Mildred James and Judy Thompson; brother in law, Thomas Ray; and sister in law, Nina Lewallen. Survivors include her three daughters: Linda Jones and husband Durwood of Buchanan Dam, Texas; Sharon Ray of Austin, Texas, Cindy O'Connor and husband Jim of Austin, Texas; brother in laws, Reverend David Ray and wife Pat of Ridgeland, Mississippi and Lou Lewallen of Bryan, Texas; seven grandchildren, Tara VanSteenburgh and husband David, Krista Brunson and husband Jonathan, Jennifer Heullant and husband Nicholas, Jerod Long and wife Kourtney, Dylan Delgado and wife Tressie, Brooke McCrary and husband Roy, Jr. and Megan Long; as well as 14 great grandchildren with 2 more on the way. Serving as pallbearers will be: David VanSteenburg, Roy McCrary, Jr., Jonathan Brunson, Jerod Long and Drake Long.

The family of Barbara Rene Ray created this Life Tributes page to make it easy to share your memories.

Send flowers to the Ray family.