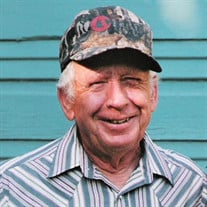 Mr. Arthur B. Tucker, 84 of Kempner, Texas passed away on February 18, 2021 in Round Rock, Texas. Mr. Tucker was born in Roby Texas to William Plez and Rebecca Frances (West) Tucker on October 26, 1936. Arthur married Mary Ann Branch on September 6, 1959 in Anson Texas, enjoying 61 years of marriage. Mr. Tucker had lived in Lampasas County for the past 32 years, having spent most of his younger years in Rotan, Texas. Arthur was a talented woodworker, he had specialized in cabinet making and finishing for several years, he simply loved working with wood. Arthur and his wife also owned and operated Tuckers Janitorial Service for over 15 years. He was of the Baptist faith and was a devoted and loving grandfather and great-grandfather. Mr. Tucker is preceded in death by three brothers, four sisters, one son, one grandchild and his parents. Arthur is survived by his wife, Mary Ann Tucker of Kempner Texas, one son, Artie Tucker and Traci of Beaumont, Texas, two daughters, Yvette Wright and Cliff of Springtown, Texas, and Dena Harbin and Dean of Austin, Texas and by one sister, Lanell White of Rotan, Texas. He is survived by 8 grandchildren, Teiah, Bradley, Mariesha, Amanda, Brian, Blake, Brandon, and Kacey. There 16 great-grandchildren surviving. The visitation for Mr. Tucker will be on Wednesday, February 24th from 5:00 -7:00 PM at Heritage Funeral Home in Lampasas. The graveside service will be held at 11:00 AM on Thursday, February 25th at Rock Church Cemetery at Rumley, Texas. John Branch will officiate the graveside service. Pallbearers will be Bradley Wright, Brian Tucker, Blake Tucker, Bandon Williams, Kacey Tucker. Memorials may be given to Battle for a Cure Foundation. Funeral arrangements are entrusted to Heritage Funeral Home of Lampasas, Texas

The family of Arthur B. Tucker created this Life Tributes page to make it easy to share your memories.

Mr. Arthur B. Tucker, 84 of Kempner, Texas passed away on February...

Send flowers to the Tucker family.