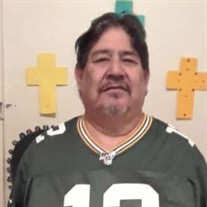 Andrew Solis Hernandez (Popo), 67, of Brady passed peacefully at home, on Monday, July 20, 2020 after months of a courageous battle of failing health. He was born to the late Andres and Anita (Solis) Hernandez on September 21, 1952 in Brady, Texas. He lived in Brownwood, Texas, for a few years, before permanently residing in Brady where he married the love of his life, Elsie Galindo on January 6, 1972. Together they shared 48 years. He is survived by his wife Elsie and his five children; Chloe Aguirre and husband Sammy, Leticia Soto, and husband Joshua of Brady Texas, Maurisa Hernandez and Fiancé Leon Gutierrez Jr. of Snyder, Texas, Christopher Hernandez and wife Symone of Round Rock Texas and Andrew G. Hernandez of Brady Texas. He worked at the Roddie Wool plant for 30 years. His hobbies included cooking, working on cars, playing cards, dancing, singing, western movies, games, and family gatherings. Popo very much enjoyed “Sunday fundays” with family, watching his football games, especially the Dallas Cowboys and his favorite team the Green Bay Packers. Spending time with his family was one of the most important things to him. His grandchildren, Brandon A. Hernandez, Jaidyn V. Hernandez, Aubriella H. Aguirre, and Leigha J. Soto were the light of his life. Popo was a beloved father and grandfather to many; he was a strong foundation for his family. For some he was Popo and for others he was Uncle Popo. To all who have known him, he will be incredibly missed and forever loved. Pallbearers will be John Mireles, Justin Gonzales, Anthony Garza, Brandon Hernandez, Erik Torres, and Sammy Quintero. Funeral arrangements are entrusted to Heritage Funeral Home of Brady.

Andrew Solis Hernandez (Popo), 67, of Brady passed peacefully at home, on Monday, July 20, 2020 after months of a courageous battle of failing health. He was born to the late Andres and Anita (Solis) Hernandez on September 21, 1952 in Brady,... View Obituary & Service Information

The family of Andrew Solis Hernandez Jr. created this Life Tributes page to make it easy to share your memories.

Send flowers to the Hernandez family.