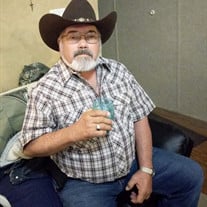 Amado(Amos) Torres, 65, of Lometa, passed away on September 23, 2021, in San Antonio. He was born in Lometa, Texas to father Jesus Torres and mother Lorenza Ruiz on September 13, 1956. Amado was a bright beam in a world of low resolution. He had an outstanding sense of humor, friendly to all, and loved by many. He worked for BNSF Railway for 39 years, and was very proud of his time with the company. Amado had a knack for giving advice and steering people in the right direction. He never met a stranger and would do whatever he could to help anyone in need. Although he loved caring for those around him, his greatest joy was being around his family. He loved spending time with his grandchildren and barbequing for the family. Amado was an outdoorsman and loved to go fishing. Welcoming the new day with a good cup of coffee brought Amado joy. He is loved by many and will be dearly missed by those who had the amazing opportunity to know him. Amado is preceded in death by father, Jesus Torres SR, mother, Lorenza Ruiz Torres, daughter, Elisabeth Ann Herrera, and brother-in-law, Sonny Menchaca. Amado is survived by sisters Janie Menchaca, of Corpus Christie, sister, Rosie and Randall Patton, of Alma Ark, sister, Tani and Richard Menchaca, of Waco Texas, Tommie and Billy Crawford, of Springdale Arkansas, brother, Jessie and Angie Torres, of San Saba, sister Ernie Art Gandesbury, of Shirly Arkansas, sister, Simona and Jay Brumbly, sister, Mary Ann and Paul Vivaros, of Grand Prairie Texas, brother, Tony Torres, and grandchildren who love him dearly. Funeral service will be held at 11 AM on Monday September 27, 2021 at Good Sheppard Catholic Church in Lometa, Texas. Burial will be at Senterfitt Cemetery.

Amado(Amos) Torres, 65, of Lometa, passed away on September 23, 2021, in San Antonio. He was born in Lometa, Texas to father Jesus Torres and mother Lorenza Ruiz on September 13, 1956. Amado was a bright beam in a world of low resolution.... View Obituary & Service Information

The family of Amado Torres created this Life Tributes page to make it easy to share your memories.

Send flowers to the Torres family.