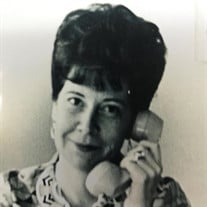 Alta Fern Freeman, 91, of San Antonio, passed peacefully in the early hours on March 3, 2020, at Methodist Hospital in San Antonio. Alta Fern was born January 14, 1929, to Arthur and Valrea Low of San Saba, Texas. Fern graduated from San Saba High School, and married her first husband, Joe Edmondson of San Saba in 1947. With Joe, Fern had daughter, Anita Fern, in 1948. They lived and farmed in the Pecan Grove community, and was a member of the Baptist Church. Joe preceded Fern in death in 1962. Fern would later remarry Gordon Freeman, of Llano County, in 1978, and resided with Gordon in San Antonio. She was stepmother to Gordon’s two sons, Don Paul and Bart Freeman, both of Llano County. Gordon preceded Fern in death in May of 2015. Fern is survived by: her daughter, Anita, and two stepsons, Don and Bart; her grandchildren Kevin Daniel, and spouse Courtney, of Austin, Tylena Campbell and spouse Wesley, of Waxahachie, Austin Freeman and spouse J’Zee of Kingsland and Grayson Freeman of Alamosa; great-grandchildren Cole Campbell, Kaiya and Caleb Daniel, Raylee and Tynlee Freeman. While Fern was known by all for her cooking, her love of reading, and her great enjoyment of traveling with Gordon to Bosier City and Branson, she was defined best by her committed and avid investment into the lives of all those surviving her — such as clipping newspaper articles of interest for them, remembering them diligently in cards every holiday, and tireless serving in the preparation of all holiday gatherings

The family of Alta Fern Freeman created this Life Tributes page to make it easy to share your memories.

Alta Fern Freeman, 91, of San Antonio, passed peacefully in the...

Send flowers to the Freeman family.