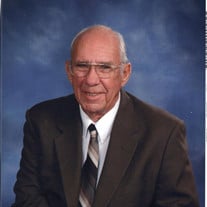 Albert Faetche, Jr. died peacefully in his home on June 8, 2021 at the age of 89. He is survived by his wife, Nancy Gilmore Faetche, his children Jean Collier and Chris Faetche, grandchildren Chris Collier and wife Amy, Jenna Collier, Lauren Collier Simpson and husband Brian, Claire Faetche, and Sarah Faetche. He had 2 great-grandchildren, Raegan Collier and Aiden Bruner. He was preceded in death by his late wife, Shirley Christie Faetche and son Albert Faetche III. Al Faetche owned Kwik Kar Oil and Lube in Brownwood with his son, Chris. He came to Brownwood to work at the Herman Bennett construction company where he built commercial properties. He formed his own company, Brownwood Construction, building commercial and residential properties. Before coming to Brownwood, he was project manager for Ginther Davis in Houston, where he supervised the construction of the first Galleria and Transco Towers, the tallest structure in Houston at the time. He raised his family in Richmond, Texas and was co-owner of National Shopping Centers. In the late 1960s, he moved his family to San Juan, Puerto Rico to manage the construction of a power plant for Brown and Root. Al grew up in Wharton, Texas. He worked in the family car dealership and gas station. In high school, he was an academic, an athlete, and a musician. He graduated from the University of Texas at Austin with a bachelor’s degree in Business Administration and a minor in Engineering. He served as president of the Kappa Sigma fraternity. Albert Faetche was an avid hunter and salt-water fisherman. His favorite spot on the Gulf Coast was Rockport, Texas, where he spent summers as a boy. He built a second home there in 1970 after a home he purchased blew down in a hurricane. It has survived several storms and hurricanes since and is a legacy his children will cherish for generations. Al loved Brownwood. He was once described as a “one-man Chamber of Commerce” for his town. He was active in the First United Methodist Church, Brownwood Kiwanis, and the Lions Club. He was the beloved patriarch of his family, in the best sense of the word. He reflected many times that he had been” lucky all [his] life. As he used to say, “This life, then the fireworks!” Funeral services will be held at 3 PM on Sunday, June 13 at the First United Methodist Church in Brownwood with Rev. Jay Fraze officiating. Graveside services will be held at 11 am on Tuesday, June 15 at the Wharton City Cemetery. Services entrusted to the care of Heritage Funeral Home, Davis-Morris Chapel in Brownwood.

Albert Faetche, Jr. died peacefully in his home on June 8, 2021 at the age of 89. He is survived by his wife, Nancy Gilmore Faetche, his children Jean Collier and Chris Faetche, grandchildren Chris Collier and wife Amy, Jenna Collier, Lauren... View Obituary & Service Information

The family of Albert Faetche created this Life Tributes page to make it easy to share your memories.

Send flowers to the Faetche family.