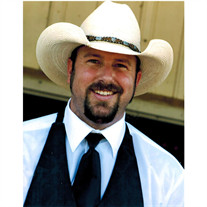 Aaron Joseph Kothmann went to be with his Lord and Savior on September 8, 2018, at the age of 36 years, 2 days. His family is comforted by a special Bible verse that Aaron selected for his confirmation when he was 14 years old: "Be thou faithful unto death, and I will give you the crown of life." Revelation 2:10. Aaron, also known as "RaRa" and "A.J.", graduated from Menard High School in 2001 where he played football, baseball, and basketball, ran track, and played drums in the Award-Winning Band from Jim Bowie Land. He went on to study at Angelo State University and Blinn Junior College. School was never his true calling though; as he once told his first-grade teacher, "I'd rather be at the ranch." Aaron's three greatest loves in this life were his family, horses, and music. He was especially good with babies and young children. His love for music began at a young age when he would watch his dad's band any chance he could get. As a little boy, he would sit behind the drummer on stage as his dad, Benny Fred, played with Johnny Bush and the Bandaleros, and he would fall asleep listening to the beat. Drums were the first instrument he learned to play. At the age of two, he'd use wooden spoons on frying pan lids to drum along with a country song. He got his first drum set when he was four; Benny Fred would play "Memphis" on the steel guitar, and Aaron would drum along. Aaron may have thought he was instructed too harshly as a child, but the guidance from his dad paid off, as he turned out to be quite the skilled drummer. He also took piano lessons for several years, but he preferred to play by ear rather than reading the notes on the page. The first band of which he was a part was named "Road Crew" and consisted of Aaron on drums, his friend and cousin, Lance Hill, on guitar, and his friend, Michael Brumley, on bass when they were in junior high school. After a few nights of practicing, imagine the surprise of their families when they actually performed a recognizable song! The next day, they performed at a pep rally and then at a high school talent show, and the rest, as they say, is history. At some point Aaron decided that if he was going to be a "real musician", he would have to play an instrument other than drums. He learned how to play the guitar and began singing and writing his own songs. He released two Texas Country albums, This is Texas Callin' and I Can't Take Me Anywhere. Aaron had several songs from those albums reach the top of the Texas Country music charts. Aaron and the Aaron Kothmann Band played for everything from dances to weddings, anniversary parties, concerts, and graduations. He loved to see people get out of their chairs and dance. He was not only a great guitar player and singer; he was an outstanding "front man" and was also one of the best two-steppers in Texas. He was always willing to dance with anyone who wanted to dance. He charmed many a little girl, young lady, and even elderly ladies by twirling them around on the dance floor. Aaron will be most remembered by his family and friends for his contagious smile, infectious laughter, unending kindness, and lovable bear hugs. Aaron never met a stranger. He was able to make friends and new acquaintances feel special and loved with his warm smile and loving embrace. Left in this world to cherish the many memories of Aaron are his wife, Mandi; parents, Benny Fred and Cordelia Kothmann; sister, Valera Kothmann Corbin ("LaLa"); brother-in-law, Brandon Corbin; and nephews and niece, Cade David, Claire Valera, and George Ransom Corbin. Others include his grandfather Carl Kothmann, his godparents, Rhome and Virginia Hill, and countless relatives and friends. He also leaves behind Mandi's two children, Makenzie and Jacob Barnett, whom he cared for as if they were his own. Preceding Aaron to Heaven were his great-grandmother, Valeria Volkmann, grandmothers, Carolyn Kothmann and Earlene Mokry, grandfathers, O.C. Kothmann and Wesley Mokry, and cousins Andrew Asbury and Jaclyn Proctor. Pallbearers are his first cousins: Conrad and Curtis Kothmann, Willy (Wilbur) Wright, Lance Hill, Cory and Colin Greenwood, Tyler Halfmann, Bryan and Caleb Asbury, and also his godson, Harrison Kothmann. Honorary pall bearers are: Brandon Corbin, Wesley Kothmann, Maj. Sean Castilla, Paul Mews, Nic (Dallas) Orr, Patrick Mitchum, Ebby Martinez, and Dustin Tillman. Right now in Heaven, Aaron is probably playing a game of 42 with his grandparents (maybe even letting Grandma Valeria cheat), singing a country song, and breaking wild horses. Aaron spent the final week of his life on earth surrounded by family and friends at the family ranch in the beautiful country home that his great-grandfather, Fritz Volkmann, built and where he spent many childhood and adult days. We find peace knowing that there's plenty of horses to ride in heaven, because after all, he'd rather be at the ranch. There will be a family visitation at Heritage Funeral Home on Thursday, September 13th from 5:00-7:00 p.m. Aaron's funeral will be held on Saturday, September 15, 2018, at Grace Lutheran Church in Menard at 10:00 a.m. Since the church is small and the family is large, there will be chairs set up in the parish hall so that friends and extended family can be a part of the service. Aaron's burial will be at Rest Haven Cemetery. He'll be laid to rest next to his grandfather, O.C. Kothmann, and his great-grandparents, Ernest and Bertha Kothmann. Memorials can be made West Texas Rehab (3001 S. Jackson St., San Angelo, TX 76904 or a charity of your choice.

Aaron Joseph Kothmann went to be with his Lord and Savior on September 8, 2018, at the age of 36 years, 2 days. His family is comforted by a special Bible verse that Aaron selected for his confirmation when he was 14 years old: "Be thou faithful... View Obituary & Service Information

The family of Aaron Joseph Kothmann created this Life Tributes page to make it easy to share your memories.

Aaron Joseph Kothmann went to be with his Lord and Savior on...

Send flowers to the Kothmann family.