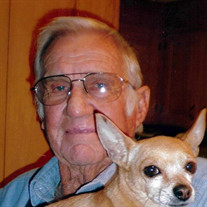 Briggs Browning was born in Lohn, Texas to Walter B. and Winnie (Newton) Browning on December 21, 1926 and passed on Saturday, March 21, 2020. Briggs started his schooling in Lohn, mid-term in the third grade and finished up at Doole High School in 1944 after his family moved to the Stacy community. In December of 1944, Briggs volunteered with the United States Navy and served our great country in the Pacific Theater aboard Barnstable APA93 for fifteen months and then U.S.S. A.W. Grant D.D. 649 until his discharge on July 6, 1946. After returning to Stacy he helped his family with farming and ranching until he met Allie Nette Wood. They would be married on February 14, 1952 in Millersview, Texas at her parents’ home. They were married for 56 ½ years. In March of 1952, went to work at Brady aviation for 6 ½ years during which Briggs and Allie moved to the Deakin Ranch on December 25, 1955 and took care of Dill Deakin stock and kept working at Brady Aviation. In April of 1960, he went to work for John and Marjorie Cox on the Cox Ranch which went on for the next 26 ½ years, while working on his own farm and ranch business. Briggs served as Director on Farmers and Ranching Co-op and McCulloch Electric Co-op. Briggs was a member of Doole Baptist Church from 1941 to it’s closing in March of 2008. He was an Ordained Deacon on August 12, 1973. Briggs was a lifelong stock farmer of McCulloch and Concho counties. Briggs is survived by a son, Sonny Browning and wife Carla of Millersview, Texas; two sisters, Hazelle Blankenship of Abilene, Texas and Joanna Hafer and husband Charles of San Angelo, Texas; one grandson, Aaron Coll Browning. Briggs is preceded in death by his parents, wife Annie Nette Browning and four sisters. Visitation will be held Tuesday, March 24, 2020 from 8:00 AM to 5:00 PM and Wednesday, March 25, 2020 from 8:00 AM to 5:00 PM at Heritage Funeral Home Brady. Celebration of Life will be held at a future date. Memorials can be made to Stacy Cemetery Box 7, Doole, Texas 76836, Doole-Stacy Community Center or charity of your choice. Funeral arrangements are entrusted to Heritage Funeral Home of Brady.

Briggs Browning was born in Lohn, Texas to Walter B. and Winnie (Newton) Browning on December 21, 1926 and passed on Saturday, March 21, 2020. Briggs started his schooling in Lohn, mid-term in the third grade and finished up at Doole High School... View Obituary & Service Information

The family of Aaron Briggs Browning Sr created this Life Tributes page to make it easy to share your memories.

Briggs Browning was born in Lohn, Texas to Walter B. and Winnie...

Send flowers to the Browning family.